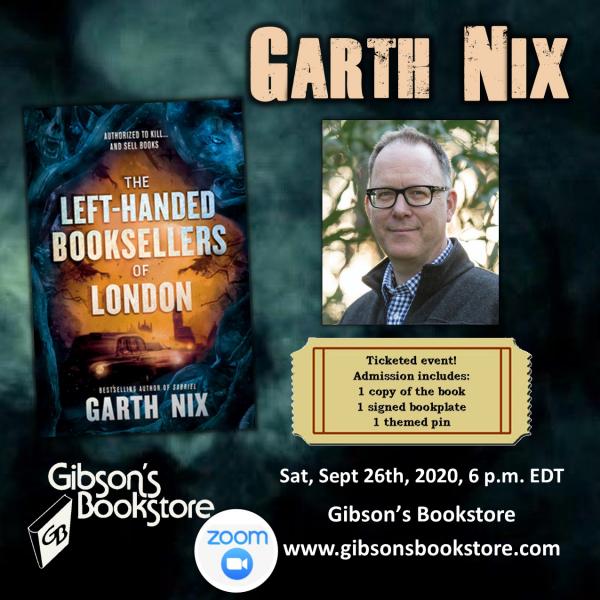 Gibson's Bookstore is thrilled to welcome Garth Nix for a virtual event, as he presents his newest novel, The Left-Handed Booksellers of London! Authorized to kill... and sell books.

This event is ticketed, with a cap of 75 attendees, so Garth can focus on in-depth Q&A with his audience! Each screen signing in to the event counts as a single attendee, but you can cram as many people around your screen as you can safely get together! Tickets sold through Eventbrite.
The tickets include:

A girl’s quest to find her father leads her to an extended family of magical fighting booksellers who police the mythical Old World of England when it intrudes on the modern world. From the bestselling master of teen fantasy, Garth Nix.

In a slightly alternate London in 1983, Susan Arkshaw is looking for her father, a man she has never met. Crime boss Frank Thringley might be able to help her, but Susan doesn’t get time to ask Frank any questions before he is turned to dust by the prick of a silver hatpin in the hands of the outrageously attractive Merlin.

Merlin is a young left-handed bookseller (one of the fighting ones), who with the right-handed booksellers (the intellectual ones), are an extended family of magical beings who police the mythic and legendary Old World when it intrudes on the modern world, in addition to running several bookshops.

Susan’s search for her father begins with her mother’s possibly misremembered or misspelt surnames, a reading room ticket, and a silver cigarette case engraved with something that might be a coat of arms.

Merlin has a quest of his own, to find the Old World entity who used ordinary criminals to kill his mother. As he and his sister, the right-handed bookseller Vivien, tread in the path of a botched or covered-up police investigation from years past, they find this quest strangely overlaps with Susan’s. Who or what was her father? Susan, Merlin, and Vivien must find out, as the Old World erupts dangerously into the New.