The Grifter, the Poet, and the Runaway Train: Stories from a Yankee Writer's Notebook 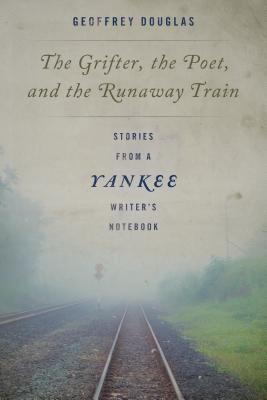 Seventeen stories in The Grifter, The Poet, and the Runaway Train: Stories from a Yankee Writer's Notebook. 20 years worth of collected work by Geoffrey Douglas, from his pieces in Yankee Magazine. Some recount public events, widely reported; others are more private, the stories of men and women surviving, facing choices, living life: the last race of a luckless small-time jockey; a local police chief’s terrible moral quandary; a young man’s tortured path toward suicide. All of them, by subject and by design, are stories for today.

In a Massachusetts town, a school shooting is barely averted by a teacher’s courage and caring. In a big-city hospital, a desperately sick infant becomes a pawn between powerful forces in a high-tech medical war. In central Maine, the state’s poorest city turns against itself under the crush of an immigrant surge. In New Hampshire’s ski country, a young wife copes with the devastation of a suddenly quadriplegic husband. In Vermont, a reporter’s one-man crusade against hate will earn him a Pulitzer Prize.

About the author: A former Bread Loaf fellow, National Magazine Award finalist and adjunct professor of writing at the University of Massachusetts/Lowell, Douglas has been a Yankee contributor since the late 1990s. David is the author of five widely reviewed nonfiction books; Dead Opposite: The Lives and Loss of Two American Boys, Class: The Wreckage of An American Family, The Game of Their Lives, The Classmates: Privilege, Chaos, and the End of an Era, and The Grifter, the Poet, and the Runaway Train.

The Grifter, the Poet, and the Runaway Train: Stories from a Yankee Writer's Notebook (Hardcover)

For over 20 years, Geoffrey Douglas has written feature-length pieces for Yankee magazine that chronicle extraordinary stories that have taken place in New England. Some have been about public events, widely reported--a Maine town turning against itself under the weight of an influx of Somalis, a fatal fire in Worcester MA, a Vermont reporter's defense of marriage equality.