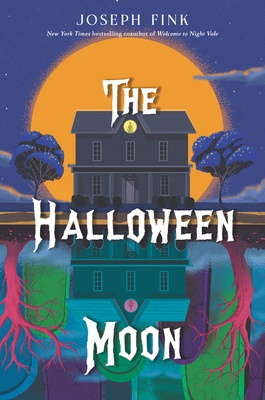 Join New York Times-bestselling author and co-creator of the hit Welcome to Night Vale podcast Joseph Fink in celebrating the launch of his debut middle grade book, The Halloween Moon! Joined by bestselling and critically acclaimed author Ransom Riggs, this is an event not to be missed.

The Halloween Moon is a wickedly fun middle grade novel about a Halloween-obsessed girl named Esther Gold, who goes out trick-or-treating for one last year, only to find her town under the thrall of a mysterious presence.

This event is ticketed (preorders of The Halloween Moon from Gibson's Bookstore will get a complimentary ticket to the event), and will take place on Crowdcast (where the audience is hidden, so no need to be camera ready!). The first *50* people to buy a book from a participating store will receive a signed bookplate from Joseph Fink with their purchase.

About The Halloween Moon

Esther Gold loves Halloween. One might say she’s obsessed with it. Therefore, she intends to go trick-or-treating again this year—even if her parents think she is officially too old. Esther has it all planned out, from her costume to her candy-collecting strategy. But when the night rolls around, something feels…off.

No one is answering their door. The moon is an unnatural shade of orange. Strange children roam the streets, wearing creepy costumes that might not be costumes at all. And it seems the only people besides Esther who are awake to see it all are her best friend, her school bully, and her grown-up next-door neighbor. Together, this unlikely crew must find a way to lift the curse that has been placed upon their small town, before it’s too late. Because someone is out to make sure Halloween never comes to an end. And even Esther doesn’t want to be trapped in this night forever.

Joseph Fink is the co-author of the New York Times bestselling adult novels It Devours! and Welcome to Night Vale. He created the Welcome to Night Vale and Alice Isn’t Dead podcasts. In 2016, Fink and Jeffrey Cranor launched the podcast network “Night Vale Presents” which features fiction and non-fiction podcasts. He lives with his wife in New York. This is his first novel for children.

We expect all participants to maintain an atmosphere of respect and fairness. Anyone who violates this standard of behavior, including engaging in any form of harassment, or otherwise disrupts the event, may, at the discretion of the organizers, be immediately removed. Participants removed as a result of their behavior will not receive any refund.

From New York Times bestselling adult author Joseph Fink comes a wickedly fun middle grade novel about a Halloween-obsessed girl named Esther Gold, who goes out trick-or-treating for one last year, only to find her town under the thrall of a mysterious presence.