Erin Bowman and A C Gaughen

Two powerful young adult authors roll in to Gibson's Bookstore to present their YA series, starting with the launch of Erin Bowman's followup to Contagion (nominated for the 2019 Edgar Award Young Adult category), Immunity! Erin will be joined in conversation by Elementae series author, A.C. Gaughen, as she presents Reign the Earth, and Imprison the Sky.

In Immunity, survivors of a deadly planetary outbreak take on a new, sinister adversary in the white-knuckle sequel to Contagion, which New York Times bestselling author Amie Kaufman called “gripping, thrilling, and terrifying in equal measures.”

In Imprison the Sky, the sweeping Elementae series continues with a heroine so powerful she can command the sky . . . Stolen from her family as a child, Aspasia has clawed her way up the ranks of Cyrus's black market empire to captain her own trading vessel--and she risks it all every time she uses her powerful magic to free as many women, children, and Elementae from slavery as she can. 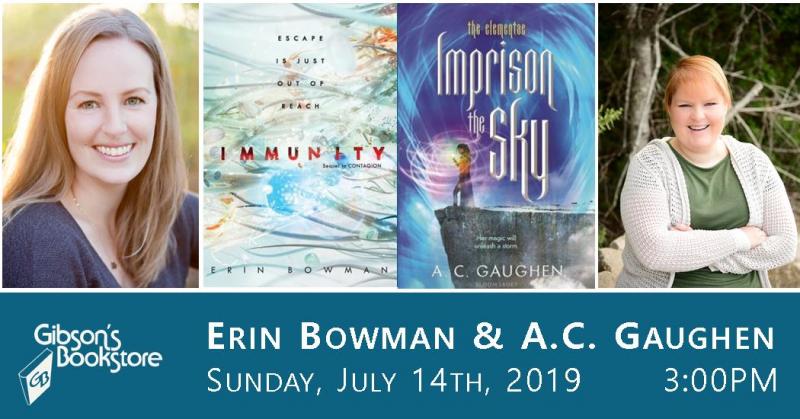 ERIN BOWMAN is the Edgar Award-nominated author of numerous books for teens, including the Taken Trilogy, Vengeance Road, Retribution Rails, and the Contagion duology. A web designer turned author, Erin has always been invested in telling stories—both visually and with words. When not writing, she can often be found hiking, commenting on good typography, and obsessing over all things Harry Potter. Erin lives in New Hampshire with her husband and children.

A. C. GAUGHEN is the author of the Scarlet Trilogy (Scarlet, Lady Thief and Lion Heart) and the Elementae (Reign the Earth, Imprison the Sky). She serves on the board for the non-profit Boston GLOW, creating opportunities to encourage and engage teen girls in the Greater Boston area, and as an Engagement Manager for the Girl Scouts of Eastern MA. She has a Masters in Creative Writing from St. Andrews University in Scotland and a Masters in Education from Harvard University.

Perfect for fans of Madeleine Roux, Jonathan Maberry, and horror films like 28 Days Later and Resident Evil, this pulse-pounding, hair-raising, utterly terrifying novel is the first in a duology from the critically acclaimed author of the Taken trilogy.

Reign the Earth (The Elementae) (Paperback)

"Another fantasy romance in the vein of books by Sabaa Tahir, Renee Ahdieh. . . . Shalia matures from a frightened girl in a foreign land to a woman unwilling to allow her destiny or desires to be controlled by the men around her." - School Library Journal

Imprison the Sky (The Elementae) (Hardcover)

"[A] fantasy romance in the vein of books by Sabaa Tahir, Renee Ahdieh." - School Library Journal on Reign the Earth

The sweeping Elementae series continues with a heroine so powerful she can command the sky . . .