Lou D'Allesandro, Lion of the New Hampshire Senate and Thoughts for Presidential Hopefuls 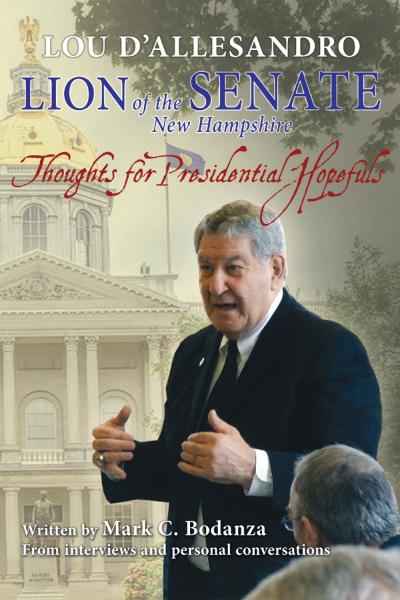 Join Mark C Bodanza and Lou D'Allesandro as they present a co-authored memoir of New Hampshire's Democratic Party patriarch, Lou D'Allesandro, Lion of the New Hampshire Senate and Thoughts for Presidential Hopefuls, tracing 40+ years serving the state as an elected official and as a key player in multiple first-in-the-nation primaries.

From the challenges and opportunities of youth, and through the vagaries of politics and higher education experienced in later years, Lou D’Allesandro has faced a wide variety of circumstances during a colorful lifetime. Mix in his role as power broker in the Nation’s first Presidential Primary and you have a story with little to compare.

There may have been little to predict the trajectory of Lou’s life in politics from his youthful school days, but the whole of the New Hampshire State Senator’s life has been one filled with surprise and the unexpected. Lou’s story is a compelling one. It demonstrates that all things are possible and even more importantly the value of genuine relationships based on trust and service. Lou’s political acumen is an example of hard work and not of advanced polls or fancy metrics – something earned, one conversation, one handshake at a time. His story is noteworthy, especially for a country in which leadership is more important than ever.

About the author: Mark C. Bodanza is a trial lawyer, historian and author.  He has published eight books.  His most recent work, titled Lou D'Allesandro, Lion of the New Hampshire Senate and Thoughts for Presidential Hopefuls,  was released under his own imprint, North Hill Press.  Bodanza’s prior books include three works on the early history of football, A Game That Forged Rivals ; 1933: Football at the Depth of the Great Depression, (read and commented on by Patriots' head coach Bill Belichick) and Rivals. Bodanza has also written a book about local abolitionist Frances Drake titled Resolve and Rescue. Additionally, he has also authored two basketball biographies, Make It Count: The Life and Times of Basketball Great JoJo White, which helped propel Mr. White into the NBA Hall of Fame in September of 2015 and Ten Times a Champion: The History of Basketball Legend Sam Jones.