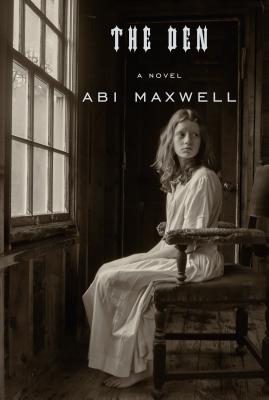 Join Gibson's for the launch of Abi Maxwell's The Den! One of Vulture’s Most Anticipated Books of 2019, The Den is a luminous, hypnotic story about two young women who find themselves ostracized from the same small New England community for the same reasons—though they are separated by 150 years. In the words of Chris Bohjalian, "Abi Maxwell has written a lush and luminous gem of a novel: heartbreaking in some moments, heartwarming in others, and always rich with wonder and surprise. The Den is a book with depth and mystery and soul.”

Henrietta and Jane are fifteen and twelve, growing up in a farmhouse on the outskirts of town. Their mother is a painter, lost in her art, their father a cook who's raised them on magical tales about their land. When Henrietta becomes obsessed with a boy from town, Jane takes to trailing the young couple, spying on their trysts--until one night, Henrietta vanishes into the woods. Elspeth and Claire are sisters separated by an ocean--Elspeth's pregnancy at seventeen meant she was quickly married and sent to America to avoid certain shame. But when she begins ingratiating herself to the town's wealthy mill owner, a series of wrenching and violent events unfold, culminating in her disappearance. As Jane and Claire search in their own times for their missing sisters, they each come across a strange story about a family that is transformed into coyotes. But what does this myth mean? Are their sisters dead, destroyed by men and lust? Or, are they alive and thriving beyond the watchful eyes of their same small town? With echoes of The Scarlet Letter, Abi Maxwell gives us a transporting, layered tale of two women, living generations apart yet connected by place and longing, and condemned for the very same desires.

About the author: ABI MAXWELL is the author of Lake People. Her fiction has also appeared in McSweeney's. She studied writing at the University of Montana and now lives in New Hampshire, where she grew up, with her husband and son.

The Den: A novel (Hardcover)

A luminous, hypnotic story of youth, sex, and power that tells of two young women who find themselves ostracized from the same small New England community for the same reasons--though they are separated by 150 years.