The Unraveling of Cassidy Holmes, with Elissa R Sloan, joined by Diane Zinna 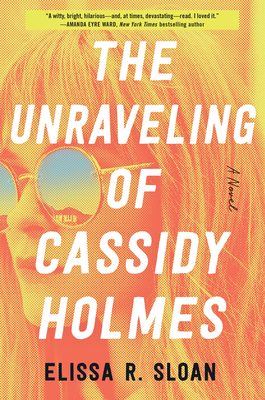 We recorded this event! You may watch it on our Youtube page: https://youtu.be/iRTt-L63-7M

Elissa R Sloan visits Gibson's Bookstore virtually to present her novel, The Unraveling of Cassidy Holmes! For fans of Daisy Jones and The Six, this novel traces the rise and fall of a pop icon, as her friends and former band-mates reel with her sudden suicide. How could someone with such a star-studded life be unhappy? Elissa will be joined in conversation by author Diane Zinna (The All-Night Sun).

“The Unraveling of Cassidy Holmes is a page-turning peek inside the glamour and brutality of life as a pop star. Sloan takes us on a wild ride through the world of music video shoots, expensive hotels, and arena tours—showing us the darkness that threatens just below the surface.” —Taylor Jenkins Reid, New York Times bestselling author of Daisy Jones and The Six

“I didn't know I was waiting for a smart, literary writer to craft a novel about the rise and fall of a teen star akin to Britney Spears until I discovered The Unraveling of Cassidy Holmes. A witty, bright, hilarious—and at times devastating—read. I loved it." —Amanda Eyre Ward, New York Times bestselling author of The Jetsetters

She is “Sassy Gloss,” the fourth member of the hottest pop group America has ever seen. Hotter than Britney dancing with a snake, hotter than Christina getting dirrty, Gloss was the pop act that everyone idolized. Fans couldn't get enough of them, their music, and the drama that followed them like moths to a flame—until the group’s sudden implosion in 2002. And at the center of it all was Sassy Cassy, the Texan with a signature smirk that had everyone falling for her.

The world is reeling from this unexpected news, but no one is more shocked than the three remaining Glossies. Fifteen years ago, Rose, Merry, and Yumi had been the closest to Cassidy, and this loss is hitting them hard. Before the group split, they each had a special bond with Cassidy—truths they told, secrets they shared. But after years apart, each of them is wondering: what could they have done?

Told in multiple perspectives—including Cassidy herself—and different timelines, this is a behind-the-scenes look into the rise and fall of a pop icon, and a penetrating examination of the dark side of celebrity and the industry that profits from it.

The Unraveling of Cassidy Holmes: A Novel (Paperback)

“The Unraveling of Cassidy Holmes is a page-turning peek inside the glamour and brutality of life as a pop star.

The All-Night Sun: A Novel (Hardcover)

A lonely young woman gets too close to her charismatic female student in this propulsive debut, culminating in a dangerously debauched Midsommar’s Eve.